content-header__row content-header__hed” data-testid=”ContentHeaderHed”>“Do You Want to Actually Get Something Done, or Do You Want to Feel Good?”: Obama Urges Activists to Talk Reforming, Not Defunding, the PoliceMr. Hope and Change is back with a warning for young Democrats fixated on slogans and ideology—and the old guard keeping down AOC. In a wide-ranging interview, the former president discusses everything from Trump’s macho appeal among Black and Hispanic men to Sasha’s private SoundCloud playlist. 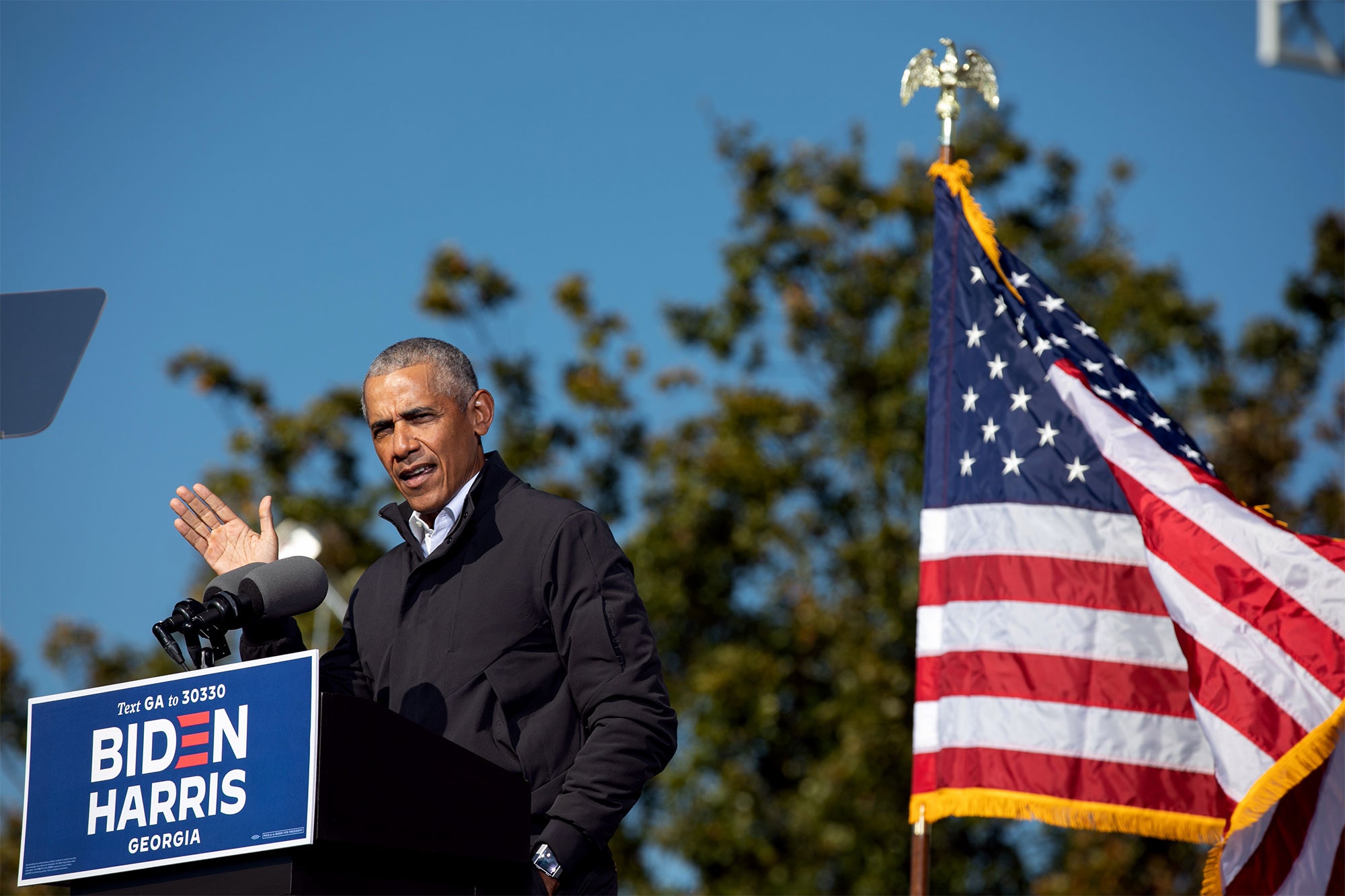 Barack Obama’s new memoir, A Promised Land, details not just his time in the White House, but his unconventional journey into politics. The book’s main character isn’t just the former president of the United States. He’s also the biracial kid navigating the hierarchies of race and class in his native Hawaii, the bookish college student who read Marcuse and Marx to flirt with girls, the young community organizer in South Side, Chicago, who earned a real-life education in the limitations of slogans and big promises. Obama’s book is dedicated, in part, to hope that it might inspire more young people to enter public service.

Obama joined Vanity Fair contributor Peter Hamby this week for his Snapchat show, Good Luck America, to talk about youth politics today, the constraints of labels and ideology, his advice for old guard Democrats, his daughter’s SoundCloud, and why some young Black men decided to vote for Donald Trump over Joe Biden in November.

Vanity Fair: President Obama, thanks for joining us.

Barack Obama: It’s good to see you again. How was your Thanksgiving?

It was good. How was yours?

I didn’t cook but I ate a lot.

Do you even cook?

You know, I used to cook, I’ll be honest. I don’t fake it. It’s been 10 years. I haven’t made anything other than an omelet.

So you write in the book about how your grandmother instilled a certain worldview in you that you ended up taking into politics. Values like modesty, humility, hard work, marrying passion  with reason. Today, though, if you’re becoming politically sentient on the internet, those aren’t really values that apply. Are you worried that young people on the left today are engaging with politics in a way that is too combative, in ways that value attention and emotion, and that is kind of unhelpful for them as they enter politics and the political conversation?

Well, you know, Malia and Sasha, my daughters, we talk about this. Malia’s 22. Sasha’s 19. And it’s interesting. Even they, and among their friends, notice that sometimes because you’re responding so quickly and trying to be clever or snappy that they sometimes feel as if we’re not really listening to each other as much as we should. We’re just trying to score points. And I think the one thing that I’d like to see all of us do—and shoot, old folks are worse than young folks in many ways about this—is to use social media to make initial contact. But then at least post-COVID, once we get through this pandemic, try to have conversations with people face to face afterward.

You know, I’m dating myself. But when we think about my original campaign, we were early adapters, but we were using, you know, MySpace and Meetup. We’d use social media to initially get people information and to contact them. But then we tried to say, Hey, let’s meet at a bowling alley, or, Let’s meet at this coffee shop and actually have a conversation. And so, you know, that’s where relationships deepen. You start listening to people, you get a better chance to know folks who maybe on the surface seem like they’re different. But maybe if you get to know ’em they might have a point of view that is worth considering.

You write about when you were a community organizer. And a lot of the folks in the communities you were dealing with really just cared about modest change. They want to do better for their families. If you’re a young activist today and you believe really passionately in a slogan, like Defund the Police, what is your advice to that activist? Knowing that a lot of politicians won’t go near that phrase, even if the nuts and bolts of the idea might be popular.

It’s interesting. We take for granted that if you want people to buy your sneakers, that you’re going to market it to your audience, right? We take for granted that if a musician drops a record, that they’re going to try to reach certain audiences by speaking to folks where they are. It’s no different in terms of ideas, right? So if you believe, as I do, that we should be able to reform the criminal justice system so that it’s not biased and treats everybody fairly, I guess you can use a snappy slogan, like Defund the Police, but, you know, you lost a big audience the minute you say it, which makes it a lot less likely that you’re actually going to get the changes you want done. But if you instead say, Hey, you know what? Let’s reform the police department so that everybody’s being treated fairly. And not just in policing, but in sentencing, how can we divert young people from getting into crime? And if there was a homeless guy, can maybe we send a mental health worker there instead of an armed unit that could end up resulting in a tragedy? You know, suddenly a whole bunch of folks who might not otherwise listen to you are listening to you. So the key is deciding, do you want to actually get something done, or do you want to feel good among the people you already agree with? And if you want to get something done in a democracy, in a country as big and diverse as ours, then you’ve got to be able to meet people where they are. And play a game of addition and not subtraction.