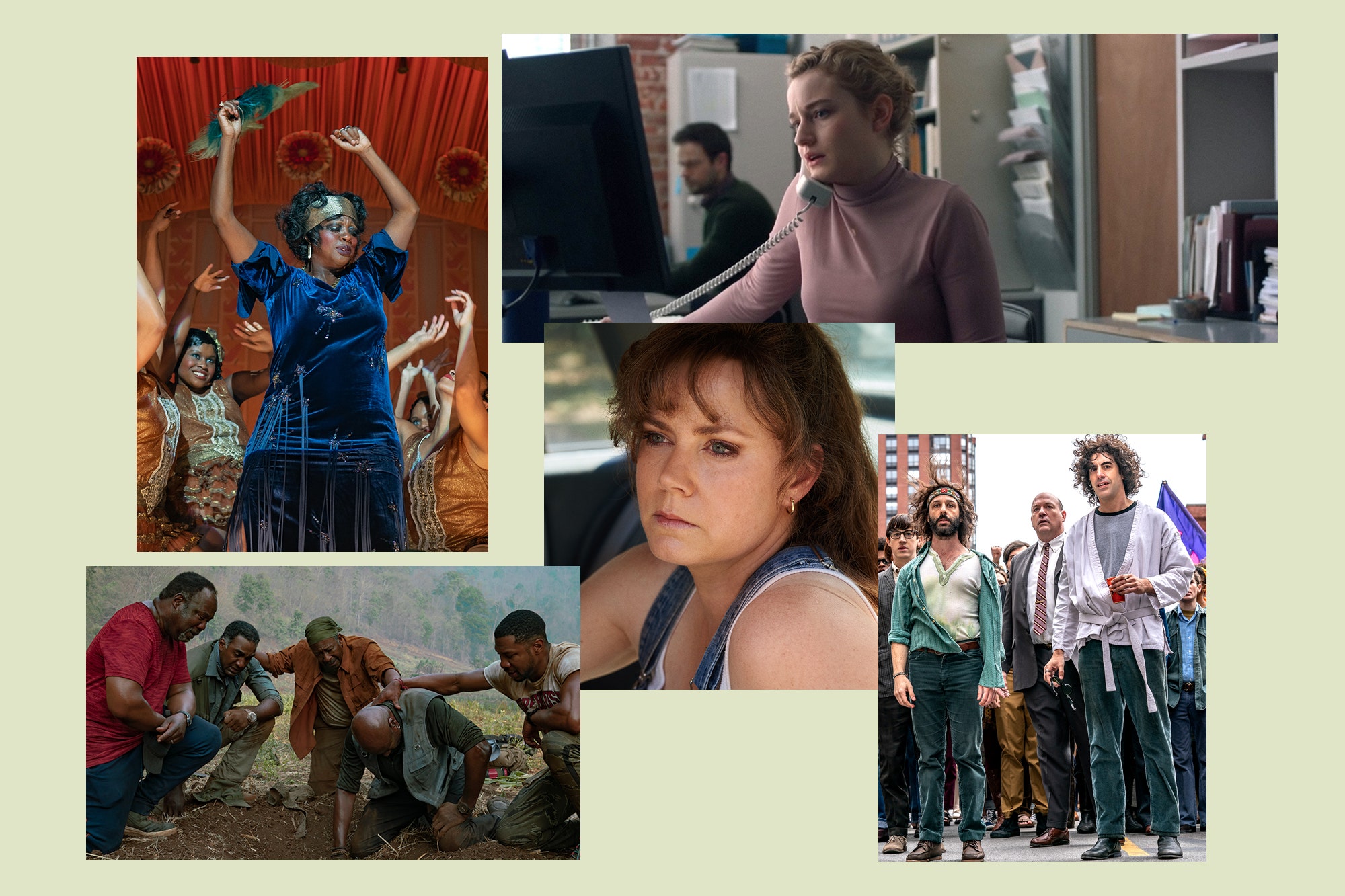 Ma Rainey’s Black Bottom, The Assistant, The Trial of the Chicago 7, Hillbilly Elegy, and Da 5 Bloods.

Under normal circumstances, many of the best movies of 2020—the season’s most celebrated awards hopefuls—would be out in movie theaters by now. Each would have its own constellation of buzz, having tumbled through the traditional festival circuit and out into the broader world of campaign-minded screenings and luncheons, fighting for a spot at next year’s Oscars.

But this, of course, isn’t a normal year. The pandemic has raged on since March, torpedoing life as we know it. As with many other industries, the movie business has been hit hard, with many theaters forced to close their doors. Festivals have either been responsibly canceled or have embraced digital and drive-in screenings and events. The Academy has adapted to this strange new landscape by tweaking Oscar-eligibility rules and pushing back the ceremony to next April, making this the longest awards season in recent memory.

Still, it’s already possible to watch plenty of the biggest contenders between now and then, from a bevy of Netflix-backed prestige dramas to smaller, more indie fare that deserves extra attention this season—and can be viewed from the comfort of your own home. Here’s a handy cheat sheet for what to catch up on over the Thanksgiving break, before a glut of December and January movies—like Nomadland, Mank, One Night in Miami, and Pieces of a Woman—charge into the conversation.

Amy Adams and Glenn Close go toe-to-toe in this adaptation of J.D. Vance’s polarizing memoir about his conservative, Appalachian family. Reviews for the Ron Howard–helmed film have been harsh, but its two stars—Close in particular—have walked away with hard-earned praise, which means this film is still a contender.

Spike Lee’s latest revolves around a squad of Vietnam vets going back to Ho Chi Minh City to recover treasure they buried in the jungle decades ago. Delroy Lindo’s searing performance as a bigoted, MAGA-hat-wearing Blood who slowly loses his mind is all but guaranteed to put him on the path toward a best-supporting-actor nom. Chadwick Boseman’s performance as Stormin’ Norman is also worth a watch, a moving, elegiac turn from the late actor, who died in August.

Kelly Reichardt’s idyllic film traces the friendship between a fur trapper and a Chinese immigrant in 19th-century Oregon as they build a baked good business, stealthily stealing milk from a nearby dairy cow (the first in the region). The film has been a hit with critics, recently becoming the most nominated project at this year’s upcoming Gotham Awards—the first awards ceremony of the season. Come for John Magaro and Orion Lee’s chemistry; stay for Eve, the titular, scene-stealing cow.

Eliza Hittman’s unforgettable drama is the carefully told story of a teenage Pennsylvania girl (newcomer Sidney Flanigan) traveling with her cousin (Talia Ryder) to Planned Parenthood in New York to get an abortion. It’s a brutal but realistic portrayal of the process, grounded by Flanigan’s and Ryder’s heartrending performances.

Writer-director-performer Radha Blank brought all her talents to this black-and-white dramedy loosely based on her life. The film stars Blank as a floundering playwright and teacher who forges a new creative path for herself when she becomes a rapper. It was a hit at Sundance, where Blank picked up the dramatic-directing award, one of the few Black women to nab that honor in the festival’s history.

Powered byJustWatchThe Trial of the Chicago 7

Aaron Sorkin stepped into the director’s chair again for this one, a dramatic retelling of the historic 1969 trial. It’s got all the scene chewing you’d expect from a Sorkin feature, courtesy of its stacked cast, which includes Sacha Baron Cohen as Abbie Hoffman, Eddie Redmayne as Tom Hayden, and Yahya Abdul-Mateen II as Bobby Seale.

Speaking of idiosyncratic Netflix fare written and directed by Oscar-winning screenwriters, let’s get into Charlie Kaufman’s latest, shall we? The surrealist drama about a failing relationship features a quartet of brilliant performances from Jessie Buckley, Jesse Plemons, Toni Collette, and David Thewlis. While it may be a little too experimental for the Academy’s liking (its loss!), it’ll probably land a slew of other awards-season nods along the way.

Written and directed by Channing Godfrey Peoples, this drama traces the dreams of a Texas mom and former Miss Juneteenth pageant winner (Nicole Beharie) who wants her daughter to follow in her footsteps and compete in the pageant too. The film arrived at a heady, auspicious time, hitting theaters and VOD while the nation was embroiled in anti-police-brutality protests after the killing of George Floyd. Many Americans learned, for the first time, about the significance of Juneteenth, lending the film some timely, much-deserved buzz.

Kleber Mendonça Filho and Juliano Dornelles’s bloody Western was a hit at last year’s Cannes Film Festival, where it picked up the Jury Prize. (Like with many other films, its North American release was altered by the pandemic, making it eligible for the 2021 Oscars.) The political film, starring Sônia Braga, revolves around a fictional Brazilian town in which villagers are forced to fight against militant outsiders—clear commentary on the current state of the country under President Jair Bolsonaro.

Garrett Bradley’s poignant documentary about a Louisiana woman fighting for 21 years to get her husband released from prison is one of the most affecting films of the year. Using a blend of archival footage and recently shot material, she captures a family verging between hope and despair, all while also showing the brutal devastation of the prison industrial complex.

Veteran cinematographer and documentarian Kirsten Johnson (Cameraperson) tackles her fear of her 86-year-old father’s death head-on by staging numerous, fantastical sequences in which he dies over and over and over again. Johnson leans into the macabre as she grapples with her father’s worsening battle with dementia, creating a portrait that is both silly and deeply poignant.

Oscar-winning filmmaker Alex Gibney, Ophelia Harutyunyan, and Suzanne Hillinger quickly rushed to the fore with this doc, an up-to-the-minute look at the chaotic COVID-19 crisis as it unfolded in the U.S. over the last few months.

In this doc, executive produced by Barack and Michelle Obama, filmmaking duo Nicole Newnham and James LeBrecht home in on Camp Jened, a summer camp in New York for teens with disabilities. It’s a personal story for LeBrecht, who has spina bifida and attended Camp Jened as a 15-year-old in 1971.

Powered byJustWatchAll In: The Fight for Democracy

Helmed by Lisa Cortés and Liz Garbus, this doc traces the dark, deep-rooted history of voter suppression in the United States, coming out in one of the most consequential election years in recent memory. The film was dreamt up by 2020 election hero Stacey Abrams, whose Georgia gubernatorial race against Brian Kemp in 2018 was said to have been marred by voter suppression. As a result, the doc is also an account of Abrams’s life, showing how she became so passionate about politics and restoring voting rights.

The Amanda McBaine and Jesse Moss–helmed documentary follows a thousand teenage boys as they descend upon the political summer leadership program at Boys State in Austin, Texas. At once heartening and horrifying, the doc—backed by Apple and A24—shows how today’s aspiring young politicians are influenced by modern plots that unfold in D.C.

Directed by Jeff Orlowski, this documentary captures the zeitgeist with its examination of social media and its ruinous control over our everyday lives. The doc also examines the corporate side of things, collating eye-opening interviews with over a dozen former employees at tech and social media companies like Facebook, Twitter, and YouTube.

15 Gifts to Send You Back to a Simpler Time