content-header__row content-header__hed” data-testid=”ContentHeaderHed”>Ron DeSantis, Josh Hawley Are Trying to Get a 2024 Leg Up by Attacking Big TechThe Florida governor is expected to sign a bill fining social media companies for “deplatforming” candidates, while the Missouri senator drops his screed against tech “tyranny.” 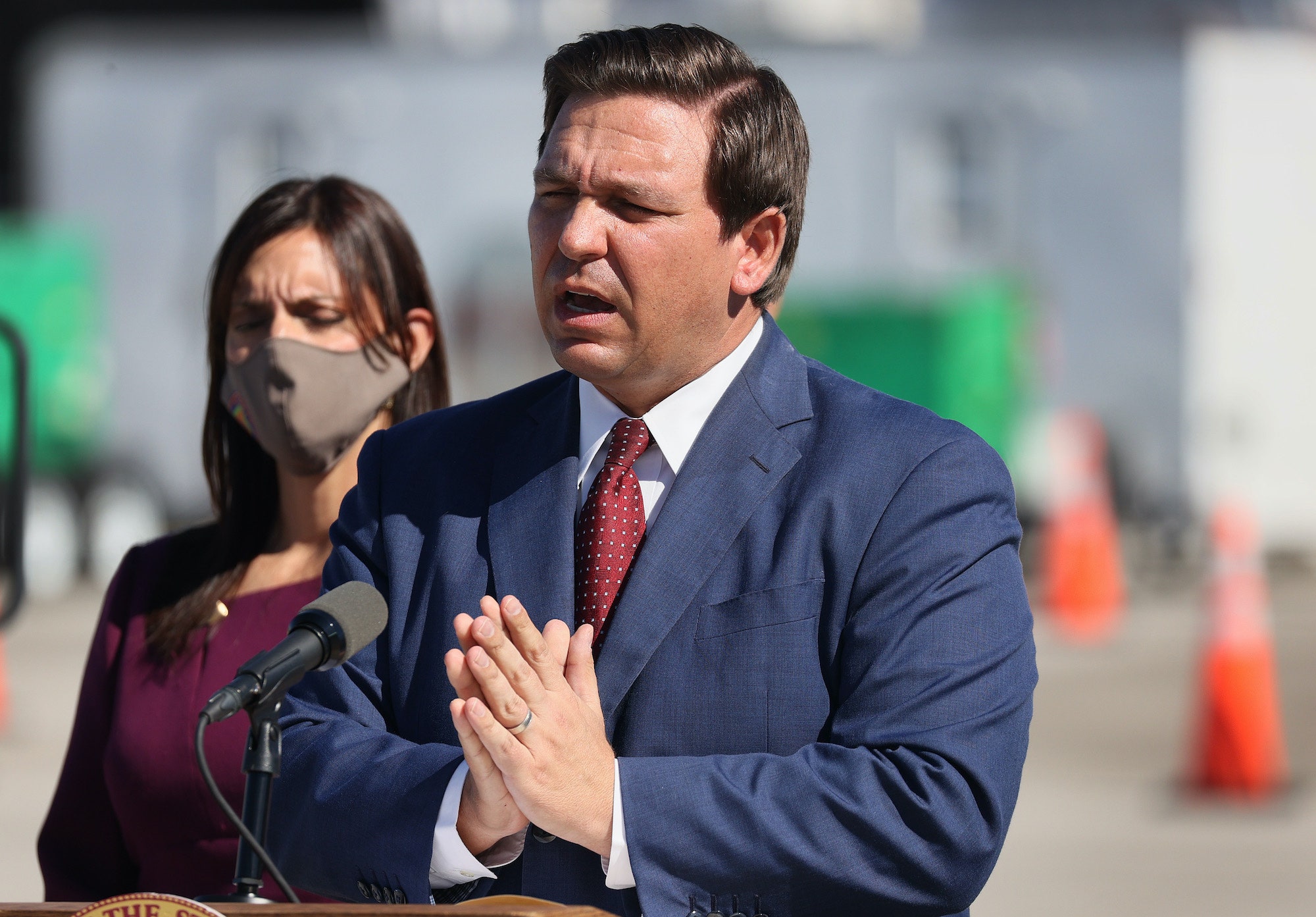 Florida Governor Ron DeSantis speaks during a press conference about the opening of a COVID-19 vaccination site in Miami Gardens on January 06, 2021.by Joe Raedle/Getty Images

Shortly after Donald Trump’s major social media accounts were banned—punitive measures enacted in response to him encouraging supporters to storm the U.S. Capitol—Florida governor Ron DeSantis made his stance known. “The Big Tech oligarchy” is “a clear and…present danger” to free speech, he warned. Now, DeSantis’s state is on the verge of passing a bill he proposed that would fine social media companies for “willfully deplatforming” political candidates. The bill, which passed the House and Senate last week and which DeSantis—who is seen as a 2024 presidential contender—is expected to sign, would dole out penalties of $250,000 a day for statewide candidates, and $25,000 a day for other candidates.

What’s more, platforms like Twitter and Facebook would be required to give users one week's notice if their accounts are facing removal, and allow them time to make changes to avert a ban. Temporary suspensions lasting up to two weeks would still be permitted. “What this bill is about is sending a loud message to Silicon Valley that they are not the absolute arbiters of truth,” Republican state lawmaker John Snyder said last week. “What this bill does is send a loud message that the Constitution does not have an asterisk that says only certain speech is free and protected.” (According to the Verge, Florida lawmakers insist the bill has nothing to do with Trump, who may very well find himself back online this week; Facebook’s oversight board will announce Wednesday whether the 45th president can return to the platform.)

It is also rife for legal challenge from tech companies, who could cite the First Amendment in court. Just as private media companies cannot be forced to publish speech they oppose, social media companies reserve the same rights. Steve DelBianco, the CEO of advocacy organization NetChoice, testified against the bill in April, saying, “Imagine if the government required a church to allow user-created comments or third-party advertisements promoting abortion on its social media page. Just as that would violate the First Amendment, so too does this, since it would similarly force social media platforms to host content they otherwise would not allow.” First Amendment law professor Howard Wasserman agreed, telling the Miami New Times, “There’s no way they could enforce it. It’s not even close. Twitter and Facebook and all these are private. They have a right to decide who gets on and off their platform.”

Florida’s bill is just one tentacle of the GOP’s ongoing war against social media companies, which Missouri senator Josh Hawley helpfully embodied with his upcoming book, The Tyranny of Big Tech. In it, according to an early review, Hawley warns that “Big Tech and Big Government [are seeking] to extend their influence over every area of American life.” (He also, according to the review, glosses over the bulk of the events in the 20th century.) Like many on the right, Hawley—seen as a potential 2024 presidential candidate, who recently introduced the Bust Up Big Tech Act—seems to be predicating his political rise on conservative animosity toward Silicon Valley, and how social media companies feed into so-called cancel culture. After his book was booted by its original publisher, Simon & Schuster, due to Hawley’s encouragement of the Capitol rioters, he has complained about the “woke mob” and portrayed himself as a free-speech martyr: “Like many others attacked by the corporations and the left, my real crime was to have challenged the reign of the woke capitalists.” (The book is now being published by Regnery Publishing.)

And like many others “attacked by the corporations and the left,” Hawley’s sense of irony seems to be wanting. The senator wrote a promotional post claiming that the corporate media and tech powers “don’t want you to read this book.” Reporter Kathryn Watson noted, “This is actually impressive. The Tyranny of Big Tech, purchasable on Amazon, advertised on Twitter, tweeted from an Apple iPhone.”