content-header__row content-header__hed” data-testid=”ContentHeaderHed”>Small Axe: Red, White, and Blue Is a Bitter Pill to SwallowJohn Boyega and Steve Toussaint are fantastic in the latest installment of Steve McQueen's five-film series. 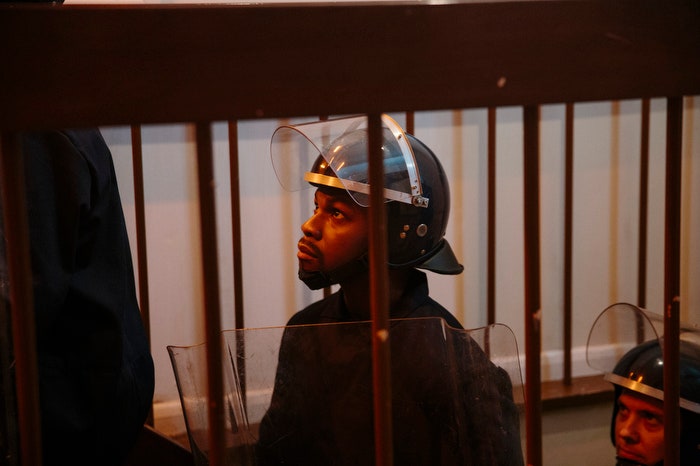 The third installment of Steve McQueen’s Small Axe anthology is also its most jarring. Several of the films in this series follow stories of police brutality in the West Indian neighborhoods of London, Mangrove and Alex Wheatle particularly. But in Red, White, and Blue, John Boyega plays real-life figure Leroy Logan, a first-generation Brit with a doctorate in science who emerges from his education with an odd passion for becoming a police officer. After the harmonious Lovers Rock and the righteous anger of Mangrove, this third film feels discordant, a story that goes against the grain of what’s come before.

Perhaps that’s because, in a way, Red, White, and Blue serves as a bulwark for the rest of the series. Small Axe is preoccupied with policing; the threat of the unjust police force looms even in Lovers Rock, the most upbeat installment in the bunch. In this film, there’s nothing oblique about it: We have seen what determined, racist constables can do. To underscore the matter, early in the story, Leroy’s father Ken (Steve Toussaint) gets beaten up by two cops when he’s accused of parking his truck illegally.

There’s no confusion here about whose side the cops are on, or what they’re capable of. But with a determination that would seem more foolhardy if Boyega weren’t so damn charming, Leroy nevertheless finds himself drawn to the idea of becoming a different kind of cop, one that can alter the institution from the inside. It’s almost as if he’s responding to a dare made in bad faith; I imagine there’s little suspense for most of the Small Axe audience on how successful Leroy’s going to be, at least at first. It seems as if Leroy is perversely taking one for the team, inserting himself into the crucible in order to prove that the problem isn’t West Indian immigrants or black Londoners, but instead the system that rewards racist behavior.

Red, White, and Blue is Small Axe’s attempt to take on the question of policing head-on, examining its effects on the West Indian community and somewhat earnestly trying to give policing a chance to prove itself useful. It does so through the relationship between Leroy and Ken—both identically hardheaded, but in completely opposing directions. Within this story is a potent parable of the conflict, now mainstream conversation between Black Lives Matter and the police; even more granular, between the distinction of reforming the police force versus defunding or even abolishing it. And all told through the lens of an immigrant father and son with contrasting takes on how to liberate themselves from the oppression they feel. It’s an astonishing effort, not least because Red, White, and Blue is wending its way down a path littered with ideological landmines.

Boyega seems to have borrowed a page from Denzel Washington’s book in the half-swaggering, half-serious way he plays Leroy, a character who seems attracted to policing thanks to the sharp uniform. Where he’s slick, Toussaint’s Ken is shaggy—a towering force of emotion and conviction, explosive and seemingly erratic as he tries (and often fails) to communicate his beliefs. The women of the family fall silent between their conflict, not daring to intervene.

Red, White, and Blue is a bit of a bait-and-switch. The story seems to be about policing—but by the end, Leroy’s lost a lot of his youthful convictions, ground down by the intolerance of his peers, their petty cruelties and punishments. McQueen reveals himself to be less interested in the ideology of policing than he is in this uniquely tense relationship between father and son. It makes for a frustratingly inconclusive story about the issues Leroy’s story raises, which include not just his difficulties at the police force but his gradual ostracism in his home community, as the West Indian youths he ostensibly wants to help shout that he’s a traitor or a “coconut.” At the same time, the story of father and son is beautifully and subtly told, culminating in an illuminating final scene that is quietly crushing.

It’s telling that the story ends before we see Leroy become an accoladed chief inspector who escorted Princess Diana around the cadet corps he co-founded and, in 2000, shook the hand of the Queen after being awarded an MBE. McQueen and co-writer Courttia Newland don’t allow Logan’s story to ripen long enough to see the fruits of his persistence. Instead, Red, White, and Blue emphasizes the grind of attempting to do right in the face of a lot of opposition, without any visible, immediate payoff—a struggle that unites father and son in spirit, even as it leads to thunderous arguments, awkward family dinners, and near-estrangement.

More than any other installment in Small Axe, it’s a bitter pill to swallow. Weighing its merit, in the midst of the policing debates in this country and in the context of the other stories of Small Axe, seems uniquely up to the individual viewer. It’s unsatisfying, but possibly necessary, to put ourselves in the place of a West Indian immigrant who was seen by others in his community as a traitor. The story of a small, marginalized community integrating into a bigger, powerful one is rarely without maddening contradiction.