content-header__row content-header__hed” data-testid=”ContentHeaderHed”>Trump Is Counting On Arizona’s “Ludicrous” Audit to Erase His Election LossArizona Republicans are helping keep the former president’s election fraud lies alive and eroding trust in the democratic process. “It would be comical,” one voting law expert tells NBC, “if it weren’t so scary.” 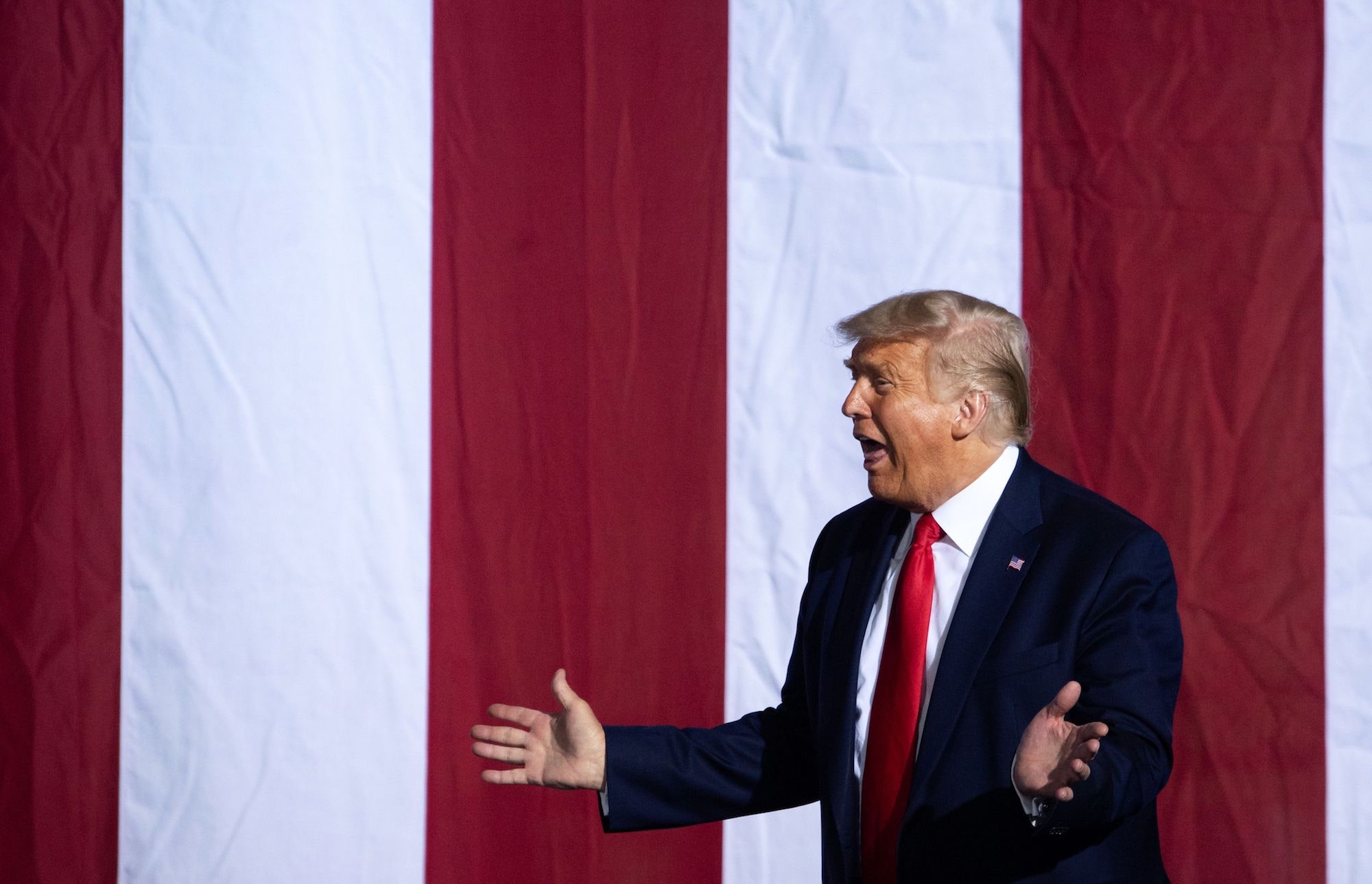 It has been more than 100 days since Donald Trump stopped being president, a stretch he’s mostly spent making weird little cameos at Mar-a-Lago events and releasing even weirder statements with thoughts on the Oscars and matters of similar importance out into the ether. In some respects, this is probably what he’s always wanted out of life—to putter about his gaudy empire, surrounded by people thrilled merely to be in his presence, to be a Very Important Person without having to do anything of any importance. And yet the fundamental emptiness at the core of Donald Trump clearly remains unfilled: He is still fixated on revenge, seeking to sabotage the Republicans he deems insufficiently faithful to him and his cause. He is still addicted to grievance, not only selling it to his supporters but also getting high on his own supply. And, of course, he is still hung-up on his decisive loss six months ago to Joe Biden, indulging with his loyalists in fantasies that he’ll return to the presidency once evidence of the “rigged” election is brought to light.

What the hell is Trump talking about? you may ask. He is referring here to the disgraceful, outrageously partisan “audit” ordered by Arizona’s Republican-led state legislature, which got underway on Friday. Billed as an effort to root out fraud and restore election integrity, the GOP-controlled Arizona senate has put a company led by a Big Lie proponent to review millions of ballots in the state’s largest county. But the effort isn’t so much about strengthening Americans’ confidence in the election process as it is about eroding it further. “In my career I have participated in more than a dozen state-wide recounts and audits,” Democratic attorney Marc Elias, who is challenging GOP anti-voting measures in court, wrote last week. “Nothing that is happening in Arizona resembles a legitimate recount or audit.”

That Republicans, all these months later, are still trying to litigate an election that recount after recount, challenge after challenge, court case after court case, has found to be secure and legitimate is ridiculous on its face. But even if it weren’t, the process by which these Maricopa County votes are being assessed has been an absolute joke. Indeed, these people have barely even tried to hide the partisan nature of the audit. Cyber Ninjas, the company Arizona Republicans hired—using taxpayer dollars, of course—to oversee the recount was founded by Doug Logan, who has reportedly promoted bogus election fraud claims by the likes of Sidney Powell and Lauren Boebert. The process, which involves using ultraviolet light that may be damaging ballots, has been lacking in transparency—and for good reason. A reporter for the Arizona Republic on Friday observed Anthony Kern—a GOP state lawmaker who was on the ballot in last year’s election, advanced Trump’s election lies, and was present at the deadly January 6 attack on Capitol Hill—reviewing votes. The reporter was removed after posting a photograph of Kern tallying ballots. “The whole thing is ludicrous,” Cindy McCain, who was censured by the Arizona GOP for endorsing Biden, said on CNN’s State of the Union Sunday. “The election is over. Biden won.”

Further sowing doubt in that reality is, of course, the idea behind this whole exercise, regardless of the lip service about election security. Indeed, Trump himself has cast the Arizona audit as a first step to overturning the results there and in other states he narrowly lost, perhaps putting him back in the White House. He’s been asking aides for updates on the Arizona process multiple times a day, according to the Washington Post. “This was a rigged election,” Trump said in his rant from a Mar-a-Lago bandstand last week. “Everybody knows it, and we’re gonna be, uh, we’re gonna be watching it very closely.”

It is, of course, pathetic. In fact, it’s hard to know who is more embarrassing—the 74-year-old former president still unable to accept his loss, or the knuckleheads in the crowd cheering him on. But the danger here is real: Trump loyalists continue to treat Biden as an illegitimate president, and use the Big Lie—which a majority of Republicans appear to believe—as the pretext for anti-voting laws they are racing to enact across the country. With their “audit,” Arizona Republicans are exacerbating distrust in democracy among those in their base, and giving themselves more permission to restrict Americans’ rights. The election may be over. But the Big Lie may go on forever. “It would be comical,” the voting law expert Rick Hasen told NBC News last week, “if it weren’t so scary.”