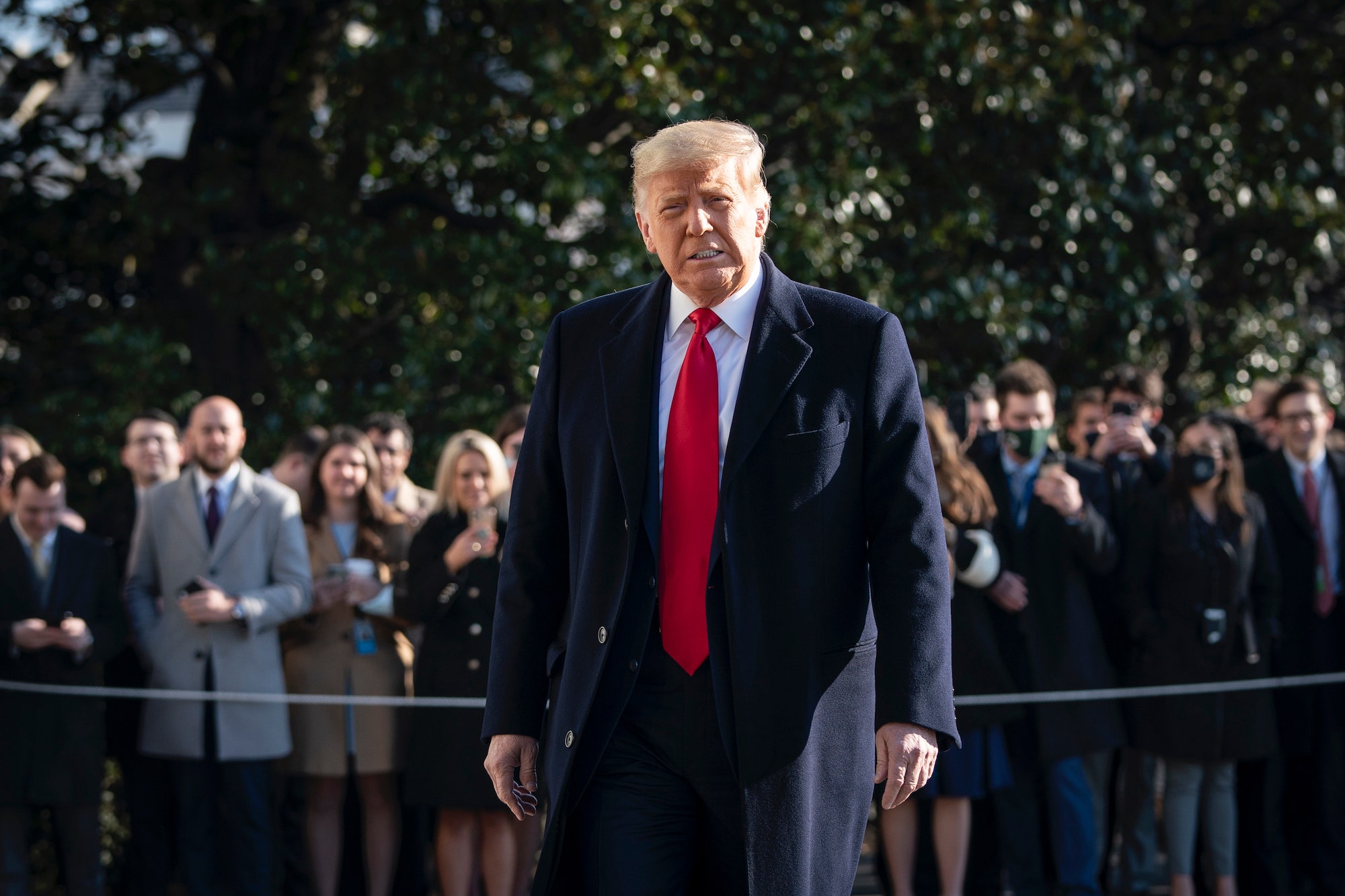 Donald Trump turns to reporters as he exits the White House on January 12, 2021 in Washington, DC. by Drew Angerer/Getty Images

As Donald Trump prepares his defense ahead of his second impeachment trial, which is expected to begin on February 9, a pair of explosive reports, published Friday by the New York Times and Saturday by the Wall Street Journal, reveal the extent to which the then-president tried to invoke the Justice Department in his democracy-shaking crusade for a second term. Trump reportedly plotted to replace the acting attorney general with an ally to try and change the outcome in Georgia and pressured DOJ officials to file a lawsuit directly with the Supreme Court as part of his attempt to overturn a free and fair election.

Republicans had pushed to postpone the impeachment trial, which could’ve started this coming week, to allow Trump time to prepare a defense and hire a legal team—one that may have to contend with additional revelations about the election-stealing plot. After decisively losing the election to Joe Biden in early November, Trump and his allies pushed unfounded fraud claims for months to supporters, culminating in the “Save America” rally opposing the Electoral College vote count that ultimately led to the deadly attack on the U.S. Capitol by pro-Trump extremists on January 6. Trump’s impeachment trial is centered on accusations that he incited that mob.

After the Supreme Court dismissed a lawsuit filed by Texas Attorney General Ken Paxton contesting four states Biden won, Trump reportedly put increasing pressure on the Justice Department to file its own suit against the states in the high court. “He wanted us, the United States, to sue one or more of the states directly in the Supreme Court,” a former administration official told the Journal. That plan was opposed by senior DOJ officials, including former Attorney General William Barr, former acting Attorney General Jeffrey Rosen, and former acting Solicitor General Jeffrey Wall, as well as White House counsel Pat Cipollone and his deputy. At one point, Trump apparently intended to go around the attorney general and call Wall directly; while he didn’t go through with that plan, one of Trump's outside attorneys did, however, send over a draft of the case Trump wanted the department to file with the Supreme Court.

The then-president apparently saw opportunity in Barr’s resignation, as Trump turned to personally pressuring Rosen, Barr’s replacement, into authorizing the lawsuit. According to the Journal, Rosen refused, maintaining, as senior department officials had, the lack of legal standing for Trump’s challenge to the election results.

Even before Barr’s exit, Trump had reportedly urged Rosen to appoint special counsels to look into his unsubstantiated claims of widespread fraud, as well as baseless accusations against Dominion, the voting machine firm targeted by the president and his allies. Rosen refused those entreaties, too, the Times reports, reiterating Barr’s conclusion that the department had looked for election-altering voting irregularities and found none. But Trump continued to press Rosen after that meeting. “He repeatedly said that he did not understand why the Justice Department had not found evidence that supported conspiracy theories about the election that some of his personal lawyers had espoused” and “declared that the department was not fighting hard enough for him,” according to the Times.

Frustrated, Trump reportedly devised a plot to oust Rosen by teaming up with Jeffrey Clark, a Justice Department lawyer who “had been devising ways to cast doubt on the election results and to bolster Mr. Trump’s continuing legal battles and the pressure on Georgia politicians,” the Times reports. The plan apparently involved firing Rosen and replacing him with Clark, who would weaponize the department to overturn Trump’s loss in Georgia, a state narrowly lost to Biden and that increasingly became Trump’s obsession in the twilight of his presidency. At one point, according to the Times, Clark “drafted a letter that he wanted Mr. Rosen to send to Georgia state legislators that wrongly said that the Justice Department was investigating accusations of voter fraud in their state, and that they should move to void Mr. Biden’s win there.” Rosen, along with deputy Attorney General Richard Donoghue, rejected Clark’s proposal. Cipollone also apparently advised the president against sending the letter to Georgia officials.

It was just days before the Capitol insurrection that senior Justice Department officials learned of the plan Trump had hatched with one of their colleagues to oust Rosen. (In a statement to the Journal, Clark denied involvement in such a plan.) The officials then made an informal pact to resign en masse if the idea came to fruition, a prospect that ultimately led the former president to drop the Clark plan and keep Rosen in place, the Times reports. The last-minute turmoil coincided with the incendiary recording of a call published between Trump and Georgia’s Secretary of State Brad Raffensperger, in which Trump pressured the state official to “find” him enough votes to reverse his loss.