The actor, who time-hops through sitcom history on the Marvel series, remembers her ’90s job at a supermodel-favorite salon and looks forward to roles that investigate getting older: “I think menopause is crazy psychedelic.” 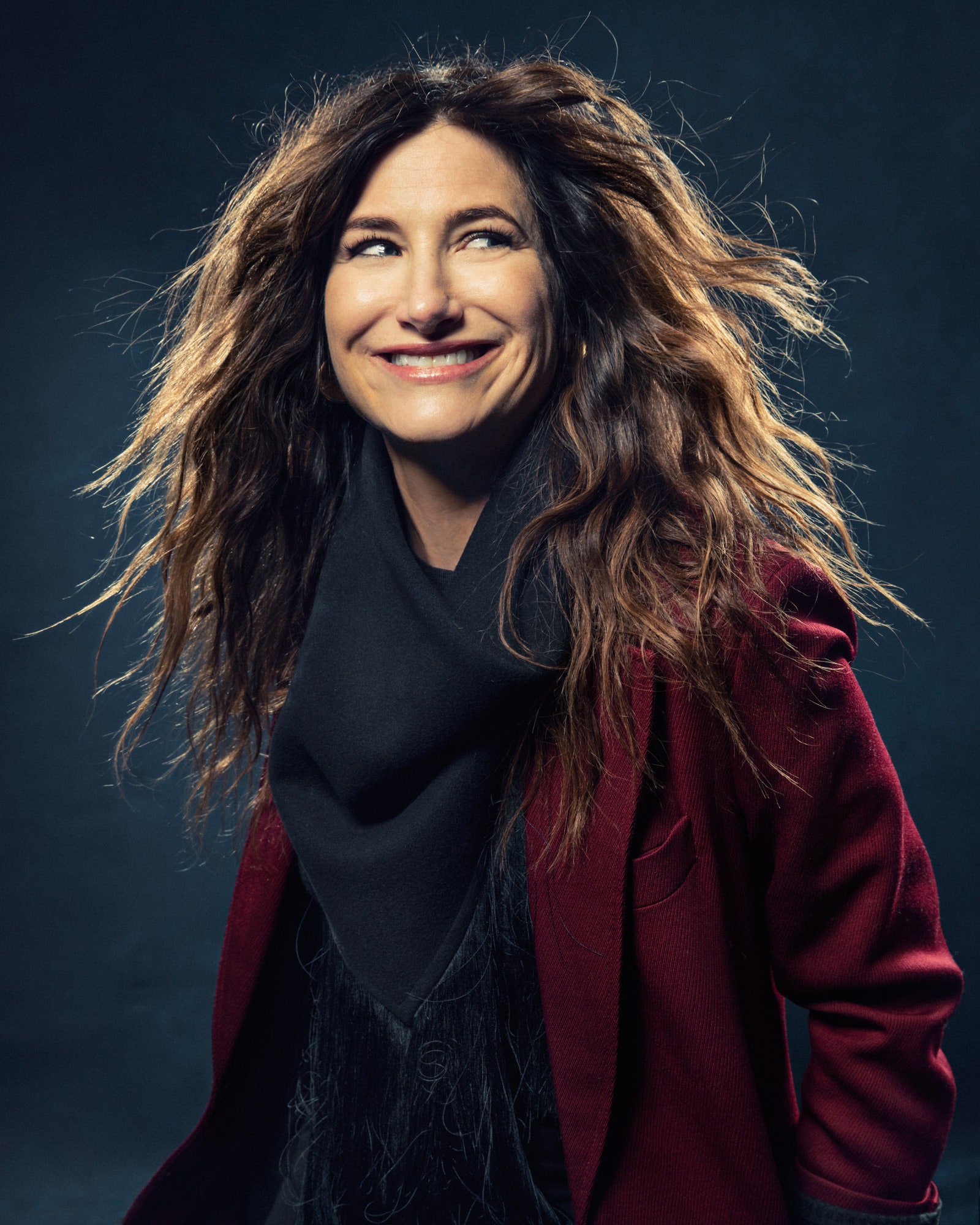 Nearly a year into our real-life time warp, the brains behind the Marvel Cinematic Universe gave us WandaVision, a show about the enormous lengths to which a grief-stricken superhero might go to conjure some approximation of normalcy. For Wanda Maximoff, played by Elizabeth Olsen, that means cheery sitcom bliss alongside her late love, The Vision (Paul Bettany), as they cycle, decade by decade, through riffs on television’s greatest hits.

But the scene-stealing role, of course, belongs to Kathryn Hahn. When the series opens in the black-and-white 1950s, she’s there in a curl set and wasp-waisted skirt playing Agnes, the perky neighbor next door who cracks jokes about her mother-in-law. In the ’80s episode, she hams it up in a curly Cher wig and sweatband, while the rest of her outfit—pink leggings, purple legwarmers—suggests a well-worn Jane Fonda cassette in the VCR. If Marvelheads were scouring for Easter eggs about the character’s real identity (it arrives in episode 7, along with an earworm jingle featuring Hahn’s telltale cackle), the rest of us heard her loud and clear in other ways. “Oh, this is gonna be a gas!” she squeals early in the show, promising housebound viewers a reprieve from uneasy reality. Another time, she quips, “How is anybody doing this sober?” The answer is: We’re not!

Vulture has deemed this moment the “Hahnaissance”; memes of Hahn’s WandaVision character—a witchy wink, mouth agape—have lately lit up the internet. It wouldn’t be the first time the actor found viral success in the midst of the pandemic. (Her family’s abridged production of David Mamet’s Glengarry Glen Ross, starring a trio of American Girl dolls, is one for the time capsule.) But Hahn, a social media holdout, isn’t scrolling newsfeeds. “We have to walk the dogs,” she told me recently at the end of this phone interview, describing the night ahead with her husband, Ethan Sandler, and two kids. “We’re attempting to make a baked potato bar.”

That set-up takes me back to the early aughts—which, in WandaVision land, would have seen her character wearing velour pants with “Naughty” spelled out in crystals across the backside. Here, she talks about ’80s hair mishaps, her days working at a supermodel-favorite salon, and the rewards of exploring the “nooks and crannies” of women’s lives onscreen.

Vanity Fair: You once told Stephen Colbert that your kids hadn’t really seen your performances because “Mommy’s body of work is not for children.” What about WandaVision—are they watching?

Kathryn Hahn: They can’t really tell me I’m cool yet—but I think they’re finally getting around to thinking I’m cool since I’ve been in the show. It’s something we can watch together, which has been really fun, especially during quarantine. Your mom’s never going to be cool, so they can’t say it out loud, but they definitely linger around more and are asking more questions.

The show hops through sitcom eras. Which period did you find yourself wanting to linger in?

I think the ’80s because I’m a kid of the ’80s, so it always feels really nostalgic—that kind of music; even the clothes I got to wear were just my dream clothes. I was, like, Oh, just like Isabel Marant right now: fold-over black pants and mules and a French cuff. I would say probably the ’80s because it’s all closest to home, style-wise. I love big hair. 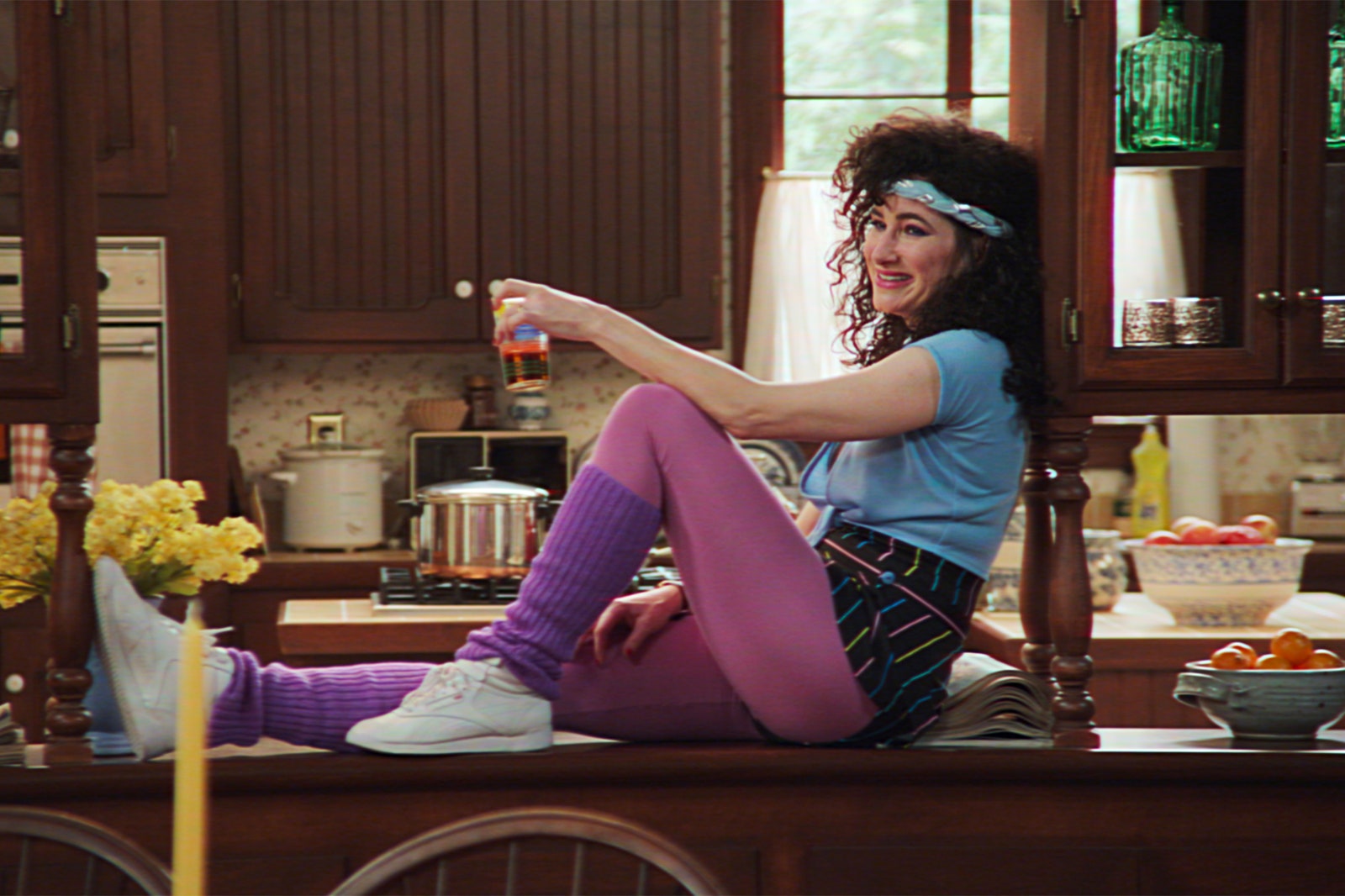 Hahn, giving everyone life, in episode 5 of WandaVision.

What was your own experience in the ’80s growing up in Ohio? Did you have a perm or feathered bangs full of hairspray? Was there a Jane Fonda cassette in the VCR?

There was not a Jane Fonda cassette, but my dad, I remember, purchased a rewind machine. I don’t even know if you know what those are, but if you wanted to preserve your VCR, you would get a separate machine that would just rewind your tape before you returned them to the library or Blockbuster. It was as big as your VCR, and it would sit on top of or beneath your VCR—and it was just simply to rewind, so you wouldn’t wear out your VCR. And I did all of it. I had a perm, but then I never got another perm, so I had straight hair and then just fried perm hair on the bottom. And I would put in Sun-In—do you remember it? It was a [lightening] spray. Going back to the ’80s, I smell Nair. I smell Jean Naté After Bath Splash, of which we had, like, a gallon that turned into probably rubbing alcohol. You never could finish it. I just see so much Aqua Net on my hair, trying to get my bangs to pick up and they just never did. I got a leather motorcycle jacket, for, like, a hundred bucks, that I wore the shit out of. And then I had a mesh—literally a mesh—vest that was hot pink that I would wear over a shirt with a piano keys tie. I just thought I was so cool. And maybe I was! Probably not. I really wanted it all to go together, but it just never gelled for me.