content-header__row content-header__hed” data-testid=”ContentHeaderHed”>“We Have to Keep the Pressure On”: Lawyer Benjamin Crump Knows Justice for George Floyd Might Not Come in the CourtroomAs the jury deliberates the fate of former police officer Derek Chauvin, the civil attorney for George Floyd’s family—and Daunte Wright’s—opens up to the Hive about legal strategy and how his clients and the people of Minneapolis are coping. 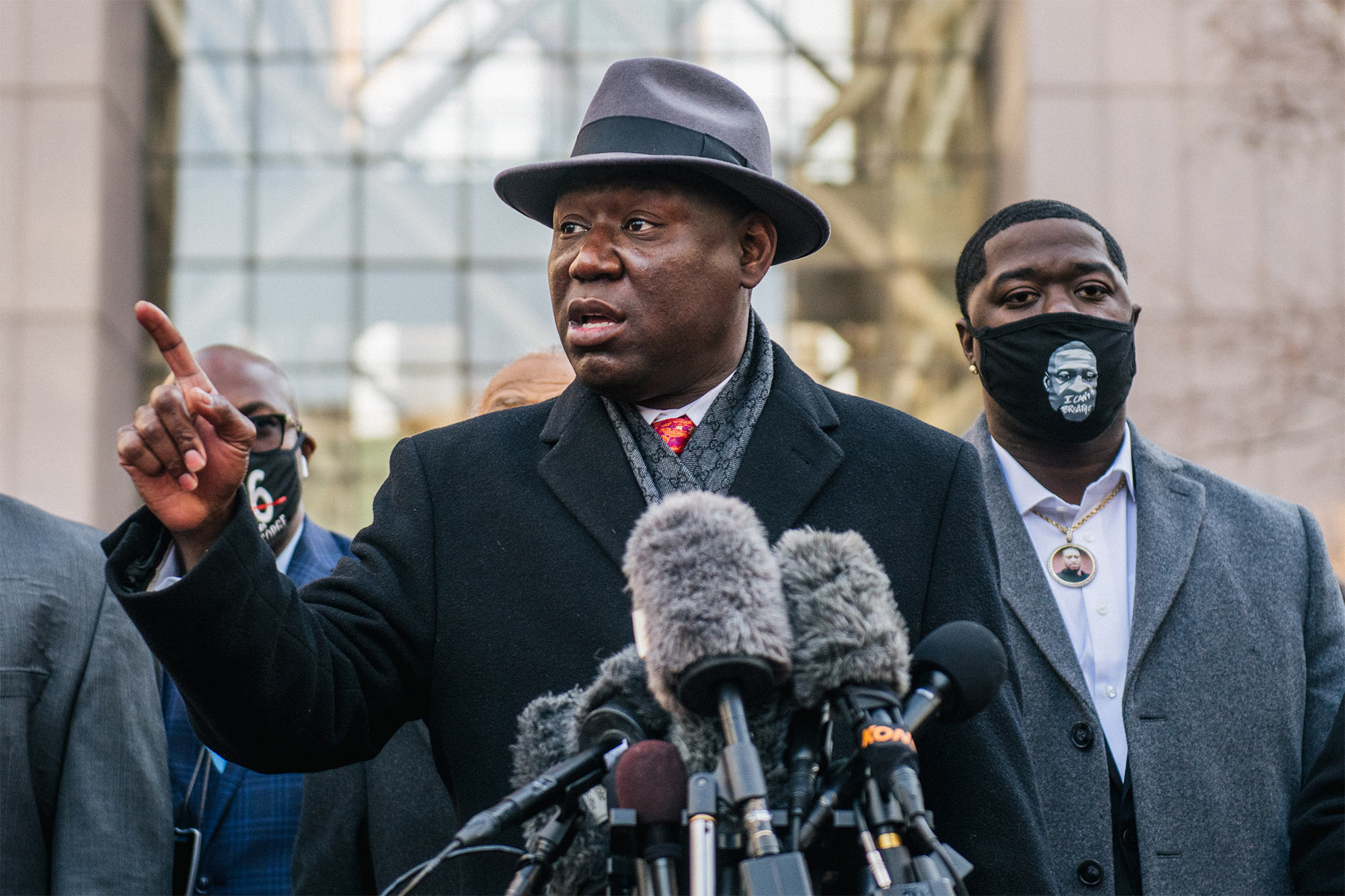 On the eve of closing arguments and jury deliberation in the trial of former Minneapolis police officer Derek Chauvin for the death of George Floyd last May, the Hive spoke with civil attorney Benjamin Crump. The lawyer and civil rights activist has won more than 200 cases involving police brutality, representing the families of slain or injured loved ones, including Michael Brown Jr., Breonna Taylor, Jacob Blake, Ahmaud Arbery, and, as of last week, Daunte Wright, who was killed during a traffic stop in Brooklyn Center, Minnesota, about 10 miles from the courthouse where the jury in the Chauvin case began deliberations Monday.

Vanity Fair: Where are you emotionally right now? The New York Times published an article recently about the number of people who’ve died at the hands of law enforcement since the start of the Derek Chauvin trial. In the past month, we’ve seen the release of a video documenting the encounter of U.S. Army Second Lieutenant Caron Nazario with officers in Windsor, Virginia; the death of Daunte Wright in Brooklyn Center, Minnesota; the release of a video documenting the death of 13-year-old Adam Toledo in Chicago; as well as the announcement that Kenosha, Wisconsin police officer Rusten Sheskey, who shot and seriously injured Jacob Blake, is back on full, active duty. What’s your perspective on the progress we are making, nationally, in the fight for police accountability?

Benjamin Crump: To be fully honest, I’m keeping my eyes on the prize. It is a journey to justice, and nobody said it was going to be a smooth journey. Nobody said it was going to work perfectly, but the one thing I know we have to do as soldiers is that we have to keep in this war for equality and justice for our people. We have to keep marching forward. You know, a lot of times this becomes very emotional, heartbreaking. When Daunte was killed, I just couldn’t fathom a police officer would even pull a weapon in Minnesota, considering that the Chauvin trial was going on for use of excessive force. But yet, [former Brooklyn Center police officer Kim Potter] engaged in what has become all-too familiar in our community, which is this engagement of excessive force when it’s unnecessary.

The fact that she was arrested within the week, I find it very encouraging to show that we are making progress. The activists and the protesters and the young people are making a difference.

That blood—from Michael Brown to Eric Garner to Stephon Clark and Alton Sterling, all those cases where police engaged in excessive force and killed brothers and sisters, and there was no accountability—it’s from their blood that we get to Minneapolis, which is ground zero for this civil rights racial reckoning in America, where we think about George Floyd, and [where] his killer, Derek Chauvin, is on trial. We know now that we will get the killer of Daunte Wright having to face the evidence against them in a court of law, which is not common at all in America. So, I’m marching forward.

Where were you when you heard the news about Daunte Wright?

I was getting on a plane from Minnesota to Florida, going home for the weekend to be with my family. I was boarding the plane. One of my paralegals called me and said, “Attorney Crump, you’re not going to believe this. They killed another brother.” I said, “You gotta be kidding.” When he said [it happened] here in Minneapolis, in Hennepin County, I almost fell out of my chair, man. I just could not believe it. If ever there was a time for officers to de-escalate and use the greatest standard of care, it’s now.

Do you think police officers—even in this moment—know how to de-escalate?

They know how to de-escalate just fine. Look at how they de-escalated with the white nationalists who were attacking the Capitol on January 6, 2021. Jimmie, I don’t think they respect our rights to the Constitution. [When] they do everything that the Constitution says you have to do for our white brothers and sisters, you have to do that for our Black and brown brothers and sisters as well. On my social media, @AttorneyCrump, I put four or five videos out there that show white men not just resistant to police, but assaulting and battering the police. They had guns. They took police cruisers, and yet still the police were not shooting them.

I’m just drawing analogies [with the videos]. Apples to apples. They [show] white American citizens, how they are treated, versus how [police officers] treat Black people. [If] a Black person moves a certain way, they’ll shoot to kill them. [A white person] can literally attack, spit on them, take their car, and drive towards them, and they still don’t shoot.

When did you start posting these videos?

I’ve done it before, but in light of Daunte’s [death] I wanted to drive home the notion that [he] should not have been killed. They did not have to arrest him. They could’ve given him a ticket and [court] summons. They didn’t have to tase or shoot him.

George Floyd’s girlfriend, a teacher, taught Daunte Wright in the past. It’s an eerie coincidence these two families would be connected by the same type of tragic losses, no?

That was so ironic. Almost a year ago, the [Floyd] family was dealing with the same situation, and now you have the Wright family starting that path. No parent wants to be part of that fraternity. In fact, it’s harder [for the Wright family] because they’re seeing George go through a character assassination, knowing that they’re going to have to go through the same thing with [Daunte] as well.